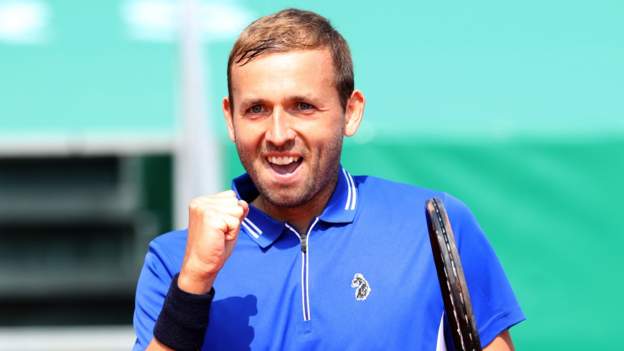 British number one Dan Evans claimed the biggest win of his career by beating Novak Djokovic in the last 16 of the Monte Carlo Masters.

Evans, who has struggled on clay in recent times, started superbly against the world number one, breaking him in his first two service games.

He was able to wrap up the opening set before Djokovic fought back at the start of the second.

It was Djokovic's first defeat of 2021 and Evans will face world number 15 David Goffin of Belgium in his first Masters Series quarter-final.

"He gave away some cheap ones today, which he never normally does. But I'm just really happy," said Evans.

"He kept me waiting a little bit in the changing room at the start of the match. That got me a bit extra fired up.

"My game plan was to try to bring him forward and have him hit the ball low in the court.

"It was difficult to get to the net and I felt sometimes I was doing too much running.

"But I also thought I did a good job to get out of my service games. He had so many break points and didn't take them, so I was a little lucky there."

In the first meeting between the pair, Evans started aggressively and took advantage of some sloppy play from the 18-time Grand Slam winner.

His chance in the set looked to have gone when a Djokovic break levelled it at 4-4 but another careless service game from the Serb gave the Briton hope and he held serve to take the set on his third set point.

Djokovic raced into a 3-0 lead in the second set but Evans showed great determination to level it at 3-3.

Evans saved a set point in the 10th game; then a dramatic double fault gave the Briton the chance to serve out for the win and he made no mistake.

"To be honest, this has been one of the worst matches from my side I can recall in the last few years," said Djokovic, who finished with 45 unforced errors.

"I felt awful on the court overall. Nothing worked. Just one of those days.

"It was just an awful performance. I can't take any positives away from this match. It definitely leaves a bitter feeling exiting the court this way.

"He deserved to win. He was a better player. He was just more focused I guess and played with a better quality in the decisive moments.

"He's really a nice player to watch, not a great player to play against. Lots of talent. He's very unpredictable with his shots. He dismantled my game."

Djokovic started and finished very poorly, but this was a sublime clay court performance by a player who had previously won just four clay court matches at tour level in his entire career.

Evans is the first man to beat the world number one and Australian Open champion this year.

His unpredictable style was underpinned by some fine serving. Djokovic says he has not been feeling great for the past 24 hours, but also conceded Evans "dismantled his game".

The British number one's surprising run in Monte Carlo has come at just the right time, as Evans had lost five of his six matches since winning a first ATP title in Melbourne in February.