Ramsey: Rams 'way too good' to be stuck in skid 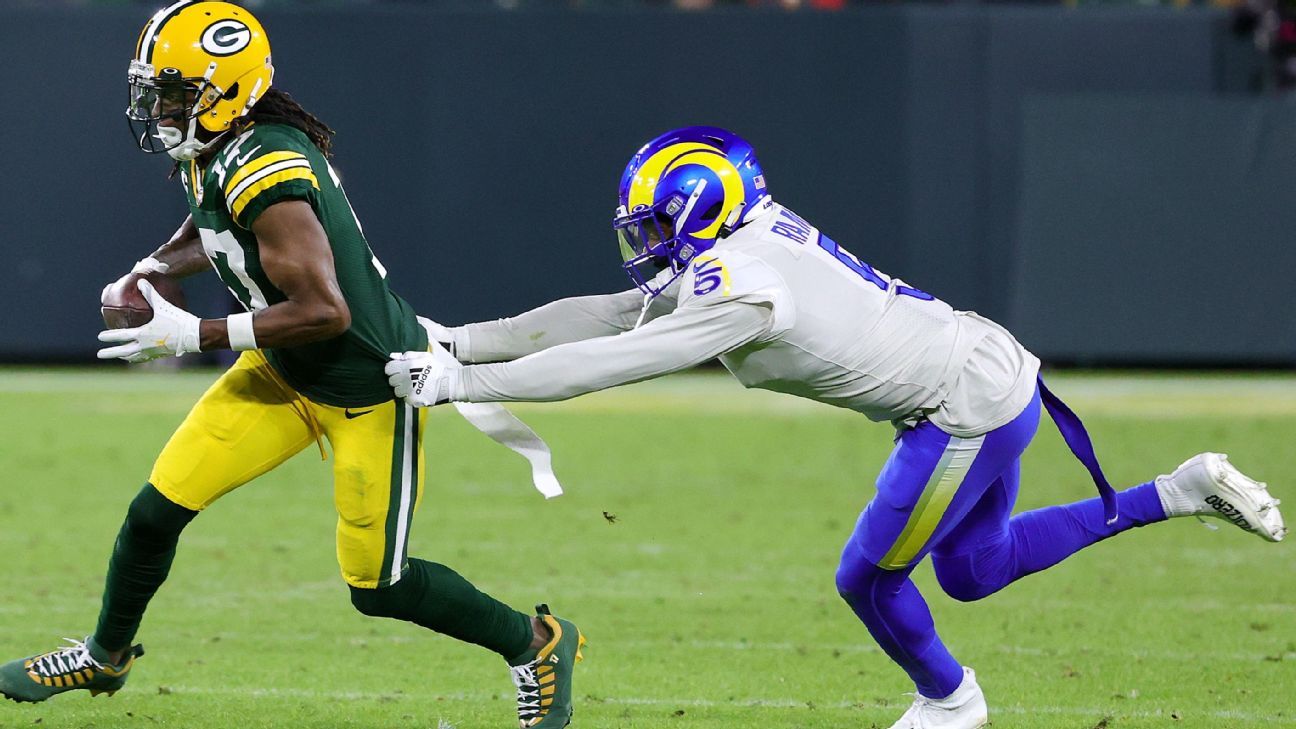 The Rams have gone all-in to build a roster capable of a Super Bowl run that includes quarterback Matthew Stafford, three-time NFL Defensive Player of the Year Aaron Donald, Ramsey and the recent additions of outside linebacker Von Miller and receiver Odell Beckham Jr.

However, with six games remaining, the Rams find themselves in the midst of only the second three-game losing streak in Sean McVay's five seasons as coach.

Ramsey admitted he felt shocked that a previously 7-1 team could slip to 7-4, as the Rams have lost by an average of 13.7 points to the Tennessee Titans, San Francisco 49ers and Packers.

The Rams are 1-4 against teams with winning records and 6-0 against all others this season. They have also struggled when falling behind, dropping to 1-4 when trailing by double digits.

McVay said he was "absolutely not" concerned that the season may be spiraling out of control.

"We've got to stop with some of these self-inflicted wounds and that's going to continue to be a focus and concentration for us," McVay said. "And then expect to see some results."

Among the self-inflicted wounds Sunday, Stafford continued a recent trend of turnovers as he lost a sack fumble in the first quarter and later threw an interception that was returned for a touchdown to give the Packers a 36-17 third-quarter lead.

The 13th-year quarterback has committed six turnovers, including throwing five interceptions -- three of which have been returned for touchdowns -- in the past three games. Stafford's three pick-sixes are the most in the NFL this season and he's the first quarterback to put together such a streak since Matt Schaub went four straight games throwing a pick-six in 2013.

"You have to take them all individually," Stafford said about his recent turnovers. "I know that is probably tough for you guys to hear, but that is the truth of the matter. That's the way I see it."

"I have total confidence and belief in Matthew Stafford," McVay said. "And everybody wants to throw out 'six turnovers' -- all of those turnovers have a totally different story and not all of those are his fault."

Against the Packers, Stafford also completed a 79-yard TD pass to second-year pro Van Jefferson and a 54-yard touchdown to Beckham for his first score as a Ram and first since Oct. 4, 2020.

Stafford finished 21-of-38 for 302 yards and three touchdowns, along with the interception. He said after the game that his physical health has not affected his play.

"I am feeling fine," said Stafford, who did not practice before the Week 9 loss to the Titans because of a back issue and then rolled an ankle late in that game. "Back was kind of barking at me a little bit that week, but I haven't missed any time since then. The rest of my body, is it 100%? No, nor is anybody else's in this league at this point of the season."

Defensively against the Packers, the Rams struggled at times to get off the field as quarterback Aaron Rodgers picked apart the middle of the unit on third downs, similar to the tactics deployed in Week 10 by 49ers coach Kyle Shanahan and quarterback Jimmy Garoppolo.

Rodgers completed 28 of 45 passes for 307 yards with two touchdowns and also kept the ball for a 1-yard score as the Packers improved to 9-3.

The Rams return to Los Angeles to play the 2-9 Jacksonville Jaguars next Sunday before they travel to Phoenix for Monday Night Football to face the division-leading 9-2 Cardinals, who defeated them 37-20 in Week 4.

More in this category: « OU loses 5-star QB, 3 others amid Riley departure Portis gets 6 months in prison for fraud scheme »
back to top