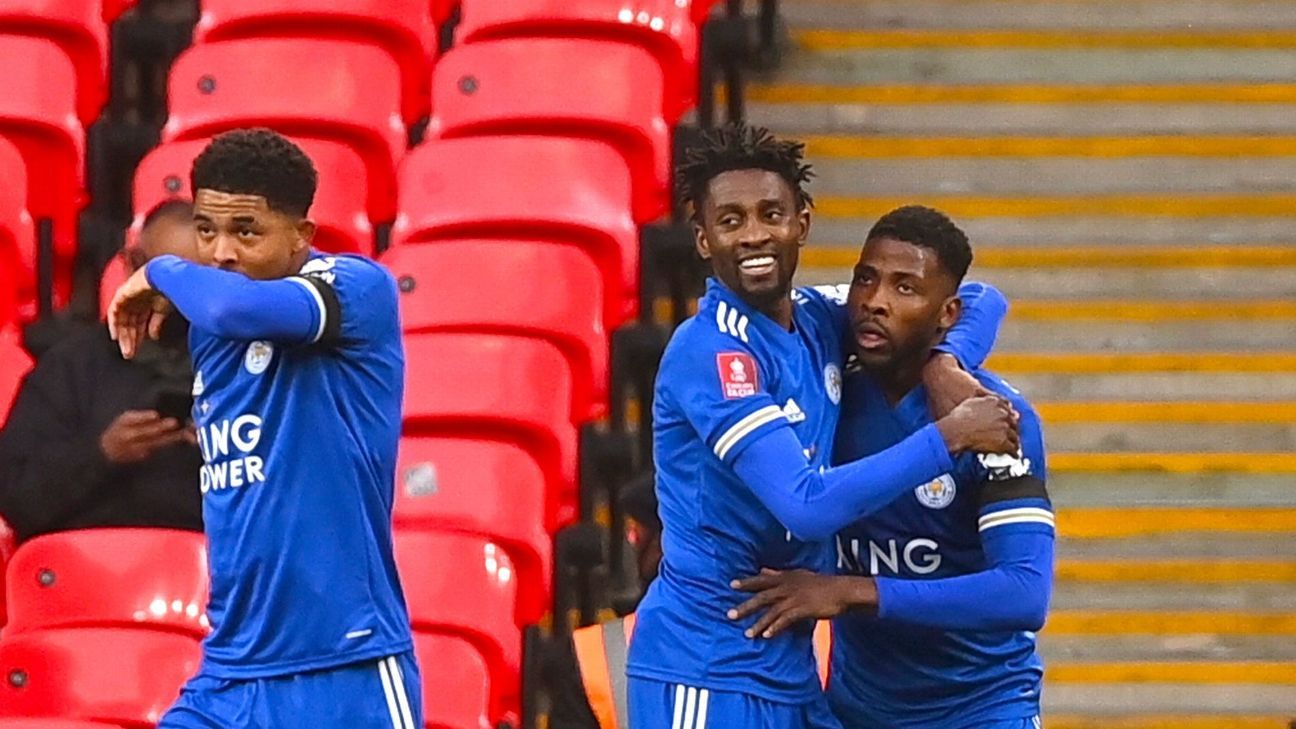 Kelechi Iheanacho scored the game's only goal as Leicester City saw out a narrow victory over Southampton at Wembley on Sunday night to book a spot against Chelsea in the FA Cup final.

Leicester, who have never won the FA Cup, had the better of the chances in the first half and might have gone ahead near the half-hour mark when Jamie Vardy got in behind the Saints defence, but his chipped shot sailed just wide of the far post.

Iheanacho put the Foxes in front early in the second half when he collected the rebound from his own shot from Jamie Vardy's cut-back and slotted his second attempt past Fraser Forster to give Brendan Rodger's side the lead.

Leicester will play Chelsea, who beat Manchester City 1-0 in the other semi on Saturday, in the FA Cup final at Wembley on May 15 (stream live on ESPN+ in the U.S.), with

A limited number of fans are expected to be allowed into Wembley for the final after a crowd of around 4,000, mainly local residents, were attended the semifinal as part of a test event for the return of crowds as COVID-19 restrictions ease.

Iheanacho was already the highest-scoring African player in the FA Cup, having overtaken Chelsea's Didier Drogba (12) by scoring in the 3-1 defeat of Manchester United in the quarterfinal.

His 14th in the competition was all about the tenaciousness of Vardy, and a little bit of luck.

Vardy turned well on the left flank and powered forward before cutting a pass back towards Iheanacho who had cleverly found some space in the area.

His first effort, which was going wide, was blocked but the ball came back to him and he side-footed past Forster.

"It's amazing for the club who have waited a long time to get to an FA Cup final," Rodgers said after the match. "We deserved it today, we defended very strong.

"Tight game with so much at stake. You work so hard and it is an opportunity to create history for your club. Concentration was good, defended well when we had to."

After Iheanacho's goal, Leicester looked comfortable with substitute James Maddision failing to hit the target with a couple of good chances.

The closest Southampton came to an equaliser was an Ibrahima Diallo effort narrowly off target but it was a timid display by the south coast side.

"We left everything on the pitch that was possible for us but we had no shots on target," Southampton boss Ralph Hassenhuttl said. "We didn't have a lot of chances in the final third, one or two good moments but it wasn't enough.

"We saw a not very good football game to be honest with both teams a little nervous."

More in this category: « Messi's father in Barca with future still unclear Mourinho's back: Roma appoint new manager »
back to top