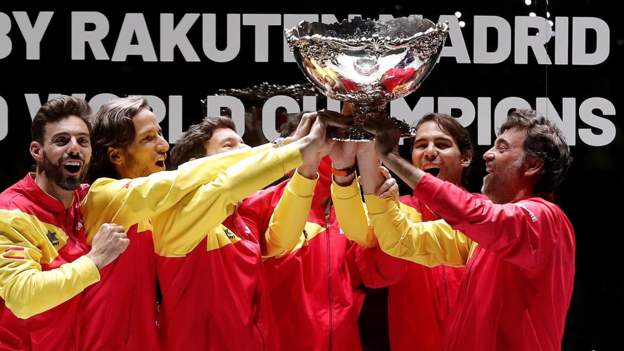 Turin and Innsbruck will join Madrid as co-hosts of this year's Davis Cup Finals from 25 November.

Last year's finals were postponed because of the coronavirus pandemic, and the same 18 nations will contest this year's event.

The International Tennis Federation says the finals will be played over 11 days rather than seven.

Great Britain will play their Group C games against France and the Czech Republic in Innsbruck in Austria.

Each city will host two of the six groups - Spanish capital Madrid will host Group A, featuring Spain, Russia and Ecuador, and Group B, containing 2019 runners-up Canada, Kazakhstan and Sweden.

As well as Group C, Innsbruck will stage Group F featuring host nation Austria as well as Serbia and Germany.

Innsbruck and Turin will host a quarter-final each while the other two will take place in Madrid, along with the semi-finals and the final on 5 December.

But some matches were poorly attended, and the congested schedule led to the group match between the United States and Italy finishing at 4.04 am local time.

"It was important to find two European cities that were well connected to Madrid, with similar playing conditions, to provide a smooth transition for players travelling from other venues," said Davis Cup Finals director and former French Open champion Albert Costa.

The ITF also confirmed that from 2022 the Finals will be reduced to 16 nations and that the multi-city format is part of the "long-term vision for the competition".