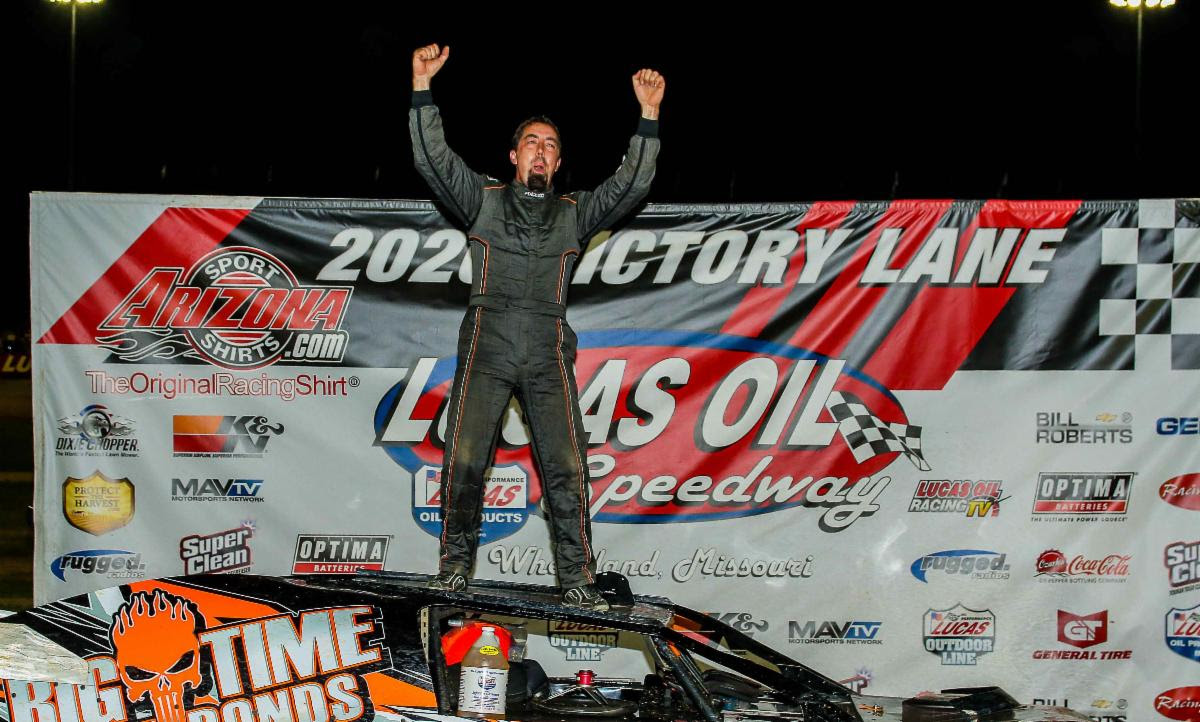 Fuqua, who’s raced a varied schedule in 2020, picked up his sixth overall win of the year but first in two attempts at Lucas Oil Speedway. He won eight times at the speedway in a memorable 2018 season, earning both track and USRA Modified National Championships.

“It took me a while to remember how to get around here,” Fuqua said in victory lane, collecting a trophy and $1,000. “It was working me to death in there. The track had a lot of character, but it made it a lot of fun for racing.”

Fuqua worked his way toward the front from an eighth starting position. But early on, it was shaping up as a duel between Whitwell and season points leader Robbie Reed.
By lap six, Reed and Whitwell had distanced themselves from the field by four seconds.

Fourth-starting Whitwell sailed past Reed coming off turn four on lap nine to grab the lead – but things were soon to quickly change.

A caution the next time around brought the rest of the field back to the top pair with Fuqua lurking in third.

Things got wild two laps after the restart. Chase Jones rolled his car in a four-car incident on the front stretch, bringing out the red flag on lap 11. Mickey Burrell, Kirby Robe and Curt Drake also were involved and their cars had to be towed away – but each driver walked away safely.

Just before that, Reed’s car lost power just as Fuqua passed him for second.

After action resumed, Whitwell had built a 1.7-second lead over Fuqua when a lap-22 caution wiped out that margin and set the stage for an exciting finish.

Fuqua had a spectacular restart, using the momentum to slingshot past Whitwell in turn two. He led from there and finished just under one second in front of Whitwell, with Ryan Middaugh third, Kyle Thompson fourth and Chase Domer going from 20th to finish fifth.

“If I didn’t get tight getting in there, I could get in the corner good. I tried the bottom where (Whitwell) was going a couple of times, but went across the race track with a shove,” Fuqua said. “I learned after about two mistakes to quit doing that and just go around him and take his line down here, if I could.”

More in this category: « It’s Danny In Battle Of The Dietrichs Jacob Allen Enjoying Career Season »