Wimbledon to give out £10m prize money for 2020 Championships 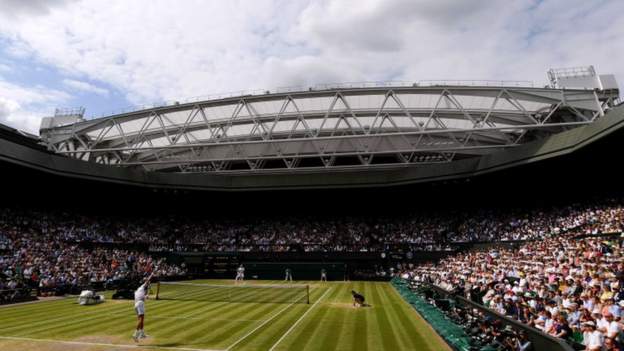 Wimbledon will distribute £10m of prize money to the 620 players who would have taken part in the 2020 Championships.

The Grand Slam event was cancelled for the first time since 1945 because of the coronavirus pandemic.

Singles players who would have been in the main draw will be given £25,000, with qualifiers, doubles and wheelchair players also each receiving money.

"We know these months of uncertainty have been very worrying," Wimbledon chief executive Richard Lewis said.

"Many players have faced financial difficulty during this period and who would have quite rightly anticipated the opportunity to earn prize money at Wimbledon based on their world ranking."

The All England Club had taken out insurance policies which allowed them to refund ticket holders, broadcast partners and sponsors in the event of a pandemic.

Players will receive one payment each and the money, which comes as as result of insurance cover for cancelation, will distributed as follows:

Wimbledon has also announced a change to the men's seedings from 2021, while there will not be a public ballot for tickets next year.

The seedings will follow the ATP rankings, instead of a formula which took previous grass-court results into account.

The ballot will not be held after this year's ticket holders were given assurance they could buy the same tickets for next year's tournament.

More in this category: « Britain's Dart makes US Open main draw for first time ATP & WTA Tours return: Why a lack of fans could mean better behaviour on court »

Which new MLB rules do we love and which should never be seen again?

The 2020 Major League Baseball season was going to be remarkable from the get-go for a number of pro...