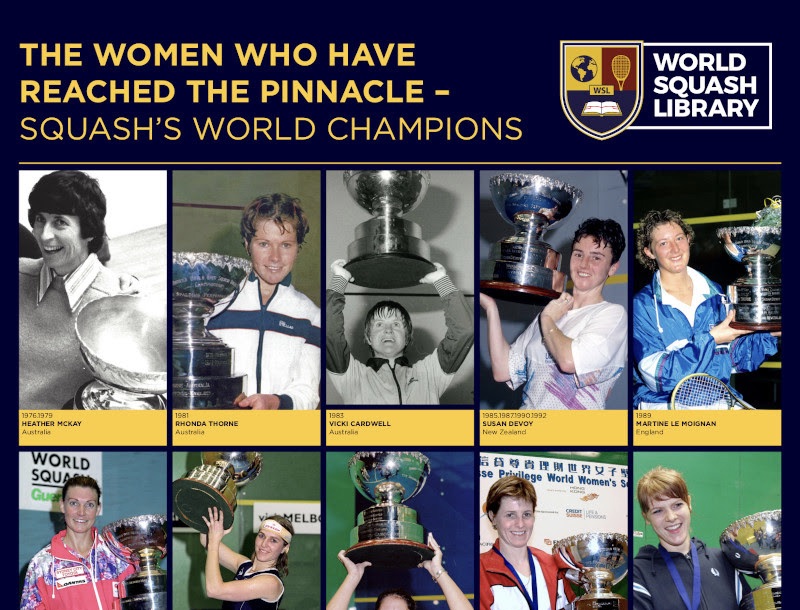 The World Squash Library has launched a second compendium of the sport’s World Championships, this time covering all the Women’s World Opens from the maiden event in Brisbane, Australia, in 1976.

The production features the dates, venue and results for each event over the five decades, including winner photos and programme cover scans.

There are also champions posters featuring all the winners in both digital and print form. They are free to download by Federations, events, clubs and enthusiasts at www.squashlibrary.info/womens-world-squash-championships

Australia’s formidable Heather McKay swept through the field in 1976 to win the inaugural world title without dropping a game – indeed, only conceding 16 points in five matches!

Oceania players dominated from then until 2003 with Kiwi Susan Devoy winning four – and Sarah Fitz-Gerald, with five, leading a group of Australian winners, including Michelle Martin, who claimed three titles.

Next to dominate was Malaysian Nicol David with a record eight titles in ten years before the arrival of the Egyptians, including current holder Nour El Sherbini having four wins.

The World Squash Library was established last October by former World Squash Federation CEO Andrew Shelley as a free service to provide information and answer queries, and preserve books, handbooks, magazines, programmes, documents and images for future generations. Donations to support the Library can be made on the Library website www.squashlibrary.info

Comprehensive digital and searchable records of all the Women’s World Championships are now also available to SquashInfo subscribers at www.squashinfo.com/history/983/womens/world-championship