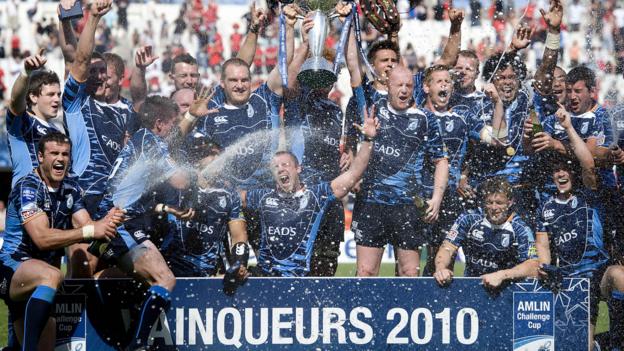 They defeated a multi-national Toulon outfit 28-21 to lift the Challenge Cup on a dramatic afternoon in Marseille.

"It's up there for me, the way we won it made it a bit more special," Williams told BBC Sport Wales.

"We wanted to be in the Champions Cup, but the experience that day is without doubt a highlight of my club career."

Tries from Jamie Roberts, Leigh Halfpenny and Bradley Davies helped the Welsh underdogs come from 13-6 down on a scorching afternoon in front of a mostly hostile crowd of 49,000, with the Stade Velodrome only 40 miles from Toulon.

After winning the Anglo-Welsh Cup in 2008, Dai Young's side had come within a penalty shootout of making the Champions Cup final in 2009, but dropped down to the Challenge Cup quarter-finals in 2010 after coming second in their Champions Cup group to eventual winners Toulouse.

After thumping Newcastle 55-20 and edging victory away to Wasps, the Mediterranean coast beckoned.

But lying in wait was a Toulon squad dominated by their foreign legion of 'galacticos', including England's Jonny Wilkinson, All Blacks duo Sonny Bill Williams and Tana Umaga and Argentina's Juan Fernandez Lobbe.

Scrum-half Richie Rees recalls the atmosphere that day in Marseille.

"We knew it was going to be special when we went there for the team run the night before," said Rees.

"There were Toulon supporters banging on the bus as we drove in and it was like an international day.

"It was an unbelievable experience, but looking back on it now, 10 years ago I probably didn't appreciate it, but it's brilliant to reminisce about a European cup for a Welsh team.

"We rode our luck for the first 20 or 30 minutes but as the game went on, our brand of rugby exposed them a bit, we had the quality, we were very accurate and our big players stood up."

Both Rees and Williams are honest enough to admit that Wilkinson's exit through injury early in the second half helped the Blues cause.

"It was a key moment, they didn't have a recognised number 10 on the bench and the balance of the game shifted, we really took control with three tries on the bounce," said Rees.

"They scored in the 79th minute, we needed to keep our discipline, one of their forwards got stripped in the tackle and I banged the ball off the field.

"But I'll never forget, Jamie Roberts jumped straight on me and I said, 'Get off, I can't breathe,' after playing 80 minutes in 30-degree heat. It brings a smile to my face now. Unbelievable memories."

"We had quality foreigners and a good young Welsh bunch coming through, a good balance and a very honest group, and it showed in that successful two or three years we had," said Rees.

Williams, who took over the captaincy at half-time when Gethin Jenkins was forced off, added: "You look at the guys who scored the tries; Bradley, Leigh Halfpenny and Jamie Roberts were home-grown talent who'd come through our system, so that was brilliant.

"With Xavier, Paul Tito and myself there were so many leaders on the pitch, that was a big part of it. We were a fit team under Dai Young, it wasn't an overnight success, but from 2007 to 2010 we would have backed ourselves against anyone in Europe.

"Dai had been through a lot early in his coaching career so he more than anyone deserved that success, he'd learned how to win tournaments."

History repeats itself in Bilbao

Eight years later, Rees was among the coaching group, acting as a water-carrier as Cardiff Blues won the same trophy against Gloucester in Bilbao, and has since been promoted to backs coach under John Mulvihill.

The 36-year-old knows it is a difficult task for the Welsh sides to assemble a competitive European squad.

"For all four regions, it's about striking the balance and you've got to spend time in recruitment," Rees said.

"It all costs money and in Wales we've probably gone away from that. We have to get back there. But the four pro sides probably haven't got that cash for that type of player. We're striving for it, that's the goal."

"We didn't lose too many to the international stage," said Williams.

"There was a core who would stay behind and run the culture and the club, so getting the right three or four overseas guys can make a massive difference.

"It's easier said than done with the market forces of England and France pulling those quality players."

Scarlets and Dragons can still dream of matching Cardiff Blues' Challenge Cup success when the 2019-20 quarter-finals are finally played in the autumn.

For those of us present in Marseille in May 2010, the occasion still stands as a moment to cherish in Welsh rugby.

More in this category: « Quins miss out on play-offs after Lang's late penalty falls short George Kruis: England and Saracens lock to move to Japan at end of season »