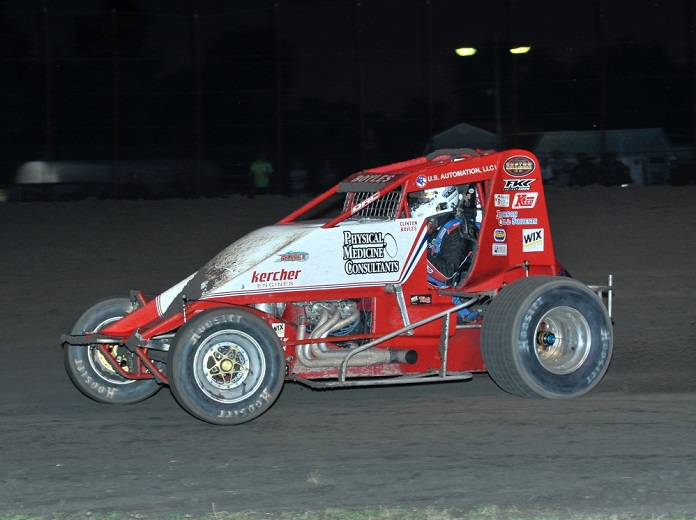 COLUMBIA CITY, Ind. – Clinton Boyles is going to be extremely busy this season.

In addition to a full season of midget action with RMS Racing, Boyles has also confirmed he’ll reunite with Paul Hazen – who he teamed with to win the Gas City I-69 Speedway track championship in 2018 – for a partial schedule of non-winged sprint car events.

The duo plans to fill in races around Boyles’ slate with RMS, completing his calendar for the year.

Though they parted ways last fall, Boyles told Sprint Car & Midget that both he and Hazen agreed during the offseason to give their partnership another shot and see if they could rekindle some of their old magic.

“I think we both kind of found ourselves in a spot where we weren’t having that much fun,” Boyles recalled. “I wasn’t quite sure that (team) was exactly where I wanted to be any more, and I think we were both ready to see what else was out there. So we separated on good terms, pretty much three quarters of the way through last year … and Paul had a few other drivers while I started midget racing a little bit more. Really, that’s how my relationship with Dave and Matt (Estep) developed on the midget side.

“But over this winter I knew the midget deal was coming together and Paul called me and said, ‘hey, you know, I really would love to have you come race for me again this year,’” Boyles added. “He didn’t want to have anyone else (driving for him) if he couldn’t have me.”

At that point, Boyles’ plans had shifted and solidified enough to where his midget ride was now his primary focus. Once he knew Hazen understood that, however, the decision to say yes was an easy one.

“Man, we had a lot of fun together. We had a lot of good runs,” said Boyles of his first stint in Hazen’s car. “I thought about it and realized that he was right in the fact that we did have a lot of fun together. It’s really special to drive for Paul and his crew. So I went back to him and said, ‘here’s what else I have going on as far as the midget ride; can we work around this?’ Because if he was agreeable to it, I knew I absolutely wanted to drive for him again.

“It just developed from there after he agreed. I’m really, really excited to be back with Paul.”

Boyles already had reason to be confident in Hazen’s equipment, considering they won a sprint car title together two years ago, but he said that upgrades over the winter have him more excited than ever.

“Paul has a great group of guys that really, really work hard to give me really good race cars, and they’ve stepped up our equipment level this year, and I think we’re going to be a little bit better than we were last year. If you look at the early results last year, we were really fast, but we started having engine issues and that led to one thing and another … and it just kind of all fell apart on us.

“Going into this year, though, I’m pretty confident that we can go have really good runs when we do go run the sprint car.”

As far as scheduling goes, Boyles wouldn’t reveal any planned dates just yet, but alluded to a schedule that lies predominately at many of the historic Indiana dirt tracks when he and Hazen do bring the No. 57 out for a spin.

“Our schedule that we’re looking at is a little bit less of a schedule than what Paul maybe was used to, but we’re looking at it from the standpoint of when we do go race, we’re going to have our ducks in a row and have really good shots at winning these races,” said Boyles. “Whether it’s a Gas City race, a Kokomo race, hopefully during (Indiana) Midget Week we can run the sprint car as well if we get to that point … but when we go run the (No.) 57 we’re fully expecting to be up front no matter what race it is.”

As for why now was the right time to come back, Boyles tipped that he believes he can continue building his brand in the short-track world with Hazen, much like he does with RMS Racing on the midget side.

“Paul has really put my name in the spotlight because of how well known his car is and the legacy that he brings to the table,” said Boyles. “I feel like we’ve done a decent job of capitalizing on that situation to develop my name in the racing world and boost it. But there’s definitely still a lot of work to be done.

“I think taking this step, as well as moving forward on the midget side of things with the RMS guys, is going to be huge for me in the long term if I can go out and produce results.”

More in this category: « Ricky Weiss Leads All 30 At Jackson Motorplex Chase Elliott On 600 Defeat: ‘It Is What It Is’ »