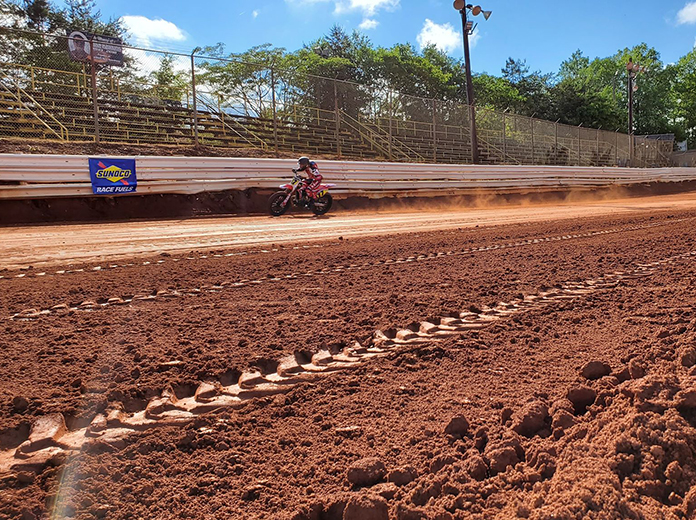 TRAVELERS REST, S.C. – The biggest flat-track motorcycle stars in the United States are shaking off the rust this weekend by visiting Travelers Rest Speedway to compete during Thunder on the Mountain 3.

The event has fallen into a prominent position as the result of the COVID-19 pandemic. South Carolina has allowed tracks to open as states deal with the pandemic, and Travelers Rest Speedway has an active history of supporting motorcycle events of all kinds – flat track and motocross in particular.

The track is also frequently used by factory and independent teams for off-season and mid-season testing. With American Flat Track, the leading flat-track motorcycle racing sanctioning body in the country, still idle, this will be the first time fans will be able to see the top riders compete this year.

Combine those factors with the involvement of SPEED SPORT TV affiliate Pit Row TV, and the recent announcement that a limited number of grandstand tickets will be sold to fans, Thunder on the Mountain 3 has the potential to be a massive hit for race fans of the two-wheeled variety.

“This is wild, it’s gonna be just like if NASCAR went to a short track again, like Greenville down the road,” said Travelers Rest Speedway Promoter Eddie Ray Thursday afternoon. “We’ve got all the big names here. I just parked the Monster Yamaha team and the Factory Indian team has the track rented for part of the day, as do some others. These guys do a lot of their testing here, so they know the track, they know what to expect and they can trust us to give them a track they can race on. This is gonna be big, I can’t wait.”

Despite nearly eight inches of rain over the course of the week, and 2.5 inches of rain on Thursday morning, bikes were on-track for private testing later that day, with a full day of open practice scheduled for Friday.

“I’m telling you, man, I’ve got magic dirt here,” said Ray. “Anywhere else, this would’ve been a washout, but she’s looking good and the riders are enjoying it. We’re going to race this weekend.”

The weekend’s purse has risen to nearly a combined $15,000 in the pro and expert classes, with two days of competition scheduled across Saturday and Sunday. On-track events are scheduled to begin at 4 p.m. ET each day and continue under the lights until completion.

SPEED SPORT TV affiliate Pit Row TV will have a crew on-site to broadcast the event live and is contributing a significant portion of sales to the facility and event promoters to assist in making the event financially feasible for both fans and competitors.

More in this category: « Beaver Dam WoO Event Undergoes Several Changes Chase Elliott On 600 Defeat: ‘It Is What It Is’ »