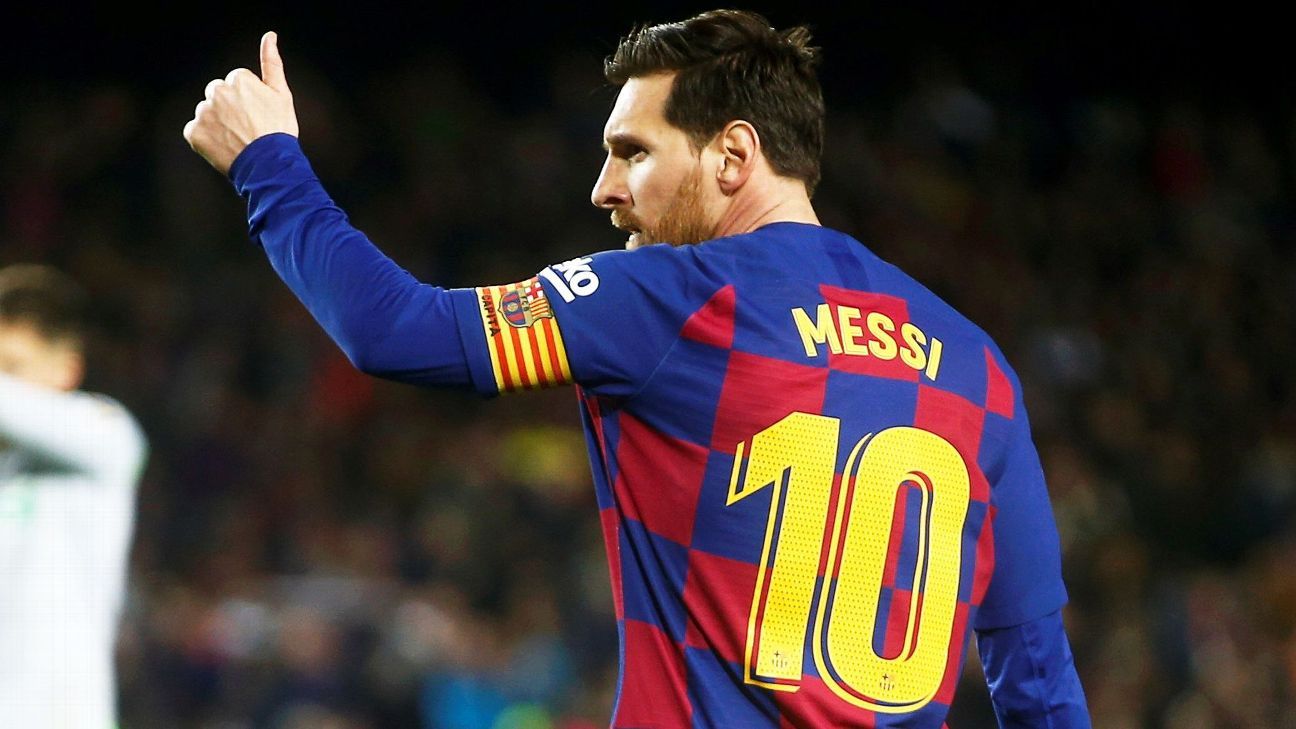 Lionel Messi said Barcelona's players are "surprised" that people inside the club would want to pressure them into taking wage cuts and confirmed the squad are happy to take a 70% hit on their salaries because of the coronavirus pandemic.

Messi also said the players will make an additional contribution so that none of the non-sporting staff's earnings will be reduced during Spain's state of emergency, which has been in place in the country since March 12.

The Argentine forward made the comments in a statement posted on social media in the name of the first team players. Other members of the squad shared it later.

Barca have now also confirmed that an agreement has been reached for the players to take a temporary hit to their wages as the club struggles to deal with the financial effects of the coronavirus crisis. The reduction will not only affect the men's first team, but all of the club's professional teams, including the basketball side, among others.

"We want to clarify that our desire has always been for a reduction to be applied to our salaries because we understand that this is an exceptional situation and we are the first that have ALWAYS helped the club with what they have asked of us," the statement first published by Messi read.

"Many times we have even done things on our own accord, at moments when we felt it necessary or important to do so.

"For that reason, it doesn't cease to surprise us that from inside the club there would be people that want to put us under a magnifying glass or try to pressure us into something that we were always clear we wanted to do. In fact, if the agreement has dragged on, it's because we were looking for a formula to help the club and its workers in these difficult times.

"For our part, the moment has arrived to announce that, aside from the 70% wage cut during the State of Emergency, we are going to also make contributions so that all the club's employees can earn 100% of their salaries for as long as this situation lasts."

Negotiations between Barca's board of directors and the players began last week. Sources revealed to ESPN that the first proposal made by the club was rejected by the players, who remained keen for an agreement to be reached.

Given the standstill, Barca then announced that the club would be using Spanish labour legislation known as an ERTE to reduce the wages of all of the club's employees -- even if that meant applying the measures unilaterally.

But the contribution to be made by Barca's first-team players -- who earn more than €500 million annually between them -- means that non-sporting staff will now continue to earn their full wage.

Barca, who are owned by their members and don't have outside investment, fear the crisis could have severe repercussions on their finances.

The club is already losing match-day revenue, as well as money from the club museum, which draws thousands of visitors every week. There is also uncertainty about how much they will make in prize money and television money this season, with football across Europe suspended.

Other clubs have already announced wage cuts for playing staff due to the spread of the coronavirus. Borussia Dortmund were among the first to confirm that the club's players will forego part of their salaries to ease the financial pressure on the club, while Juventus players announced over the weekend they would give up their salaries for the next four months.

In Spain, Atletico Madrid, Espanyol and Alaves have all announced they would be turning to labour legislation to reduce wages, too.

Spain is one of the worst-hit countries by the COVID-19 pandemic. The latest figures released on Monday revealed there have been 85,195 infections in the country and 7,300 deaths.