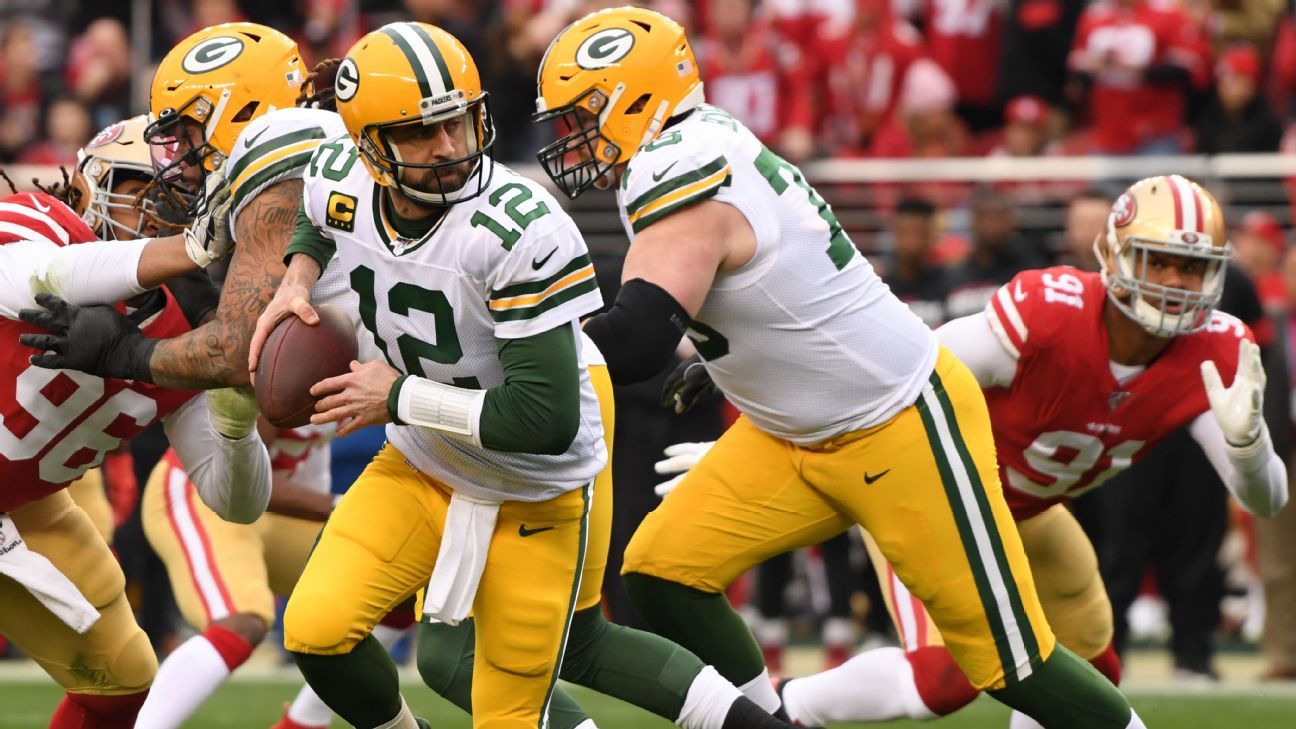 SANTA CLARA, Calif. -- Even at age 36, Aaron Rodgers believes he and the Green Bay Packers will be in this position again -- on the verge of another Super Bowl.

Perhaps that's why Rodgers, while clearly disappointed after Sunday's 37-20 NFC Championship loss to the San Francisco 49ers, projected optimism after the gap between his first and possible second Super Bowl widened by at least another year.

"The window's open, and I think we're going to be on the right side of one of these real soon," Rodgers said after his third NFC title game loss in four tries as a starter.

"That's the exciting thing. It doesn't make this feeling any easier, but that is very exciting moving forward."

To get back to the Super Bowl, the Packers will have to close the gap between them and teams such as the 49ers. Of the Packers' four losses this season, including playoffs, two came at the 49ers, and they trailed by a combined score of 50-0 at halftime of the two games.

"Well, it looks pretty big," Rodgers said of the gap. "They got us a couple times, but I don't think it's that big. I think we're really close. I think we're just a little more consistent performance away from consistently playing with these guys. But we got him at their place twice. I've said this before: We've got to get one of these at home. It's a different ballgame. It's different playing in 20-degree weather and snow. Cold and wind is a different type of game than playing here."

Rodgers has played all four of his conference championship game starts on the road, winning only in Chicago in 2011, the victory that led to the Packers' Super Bowl XLV win.

But after two straight losing seasons and a coaching change, Rodgers called this season special for one overriding reason.

"This one will always be special because it became fun again," he said.

Rodgers praised general manager Brian Gutekunst and the Packers' personnel department for the additions they made in free agency, most notably signing Preston Smith and Za'Darius Smith.

"We weren't picked by most people to win our division, and we found a way to not only do that but win a home playoff game and get to this spot," Rodgers said. "Just felt like it was meant to be, almost, so that's a little more disappointing. Then you realize I don't have the same number of years ahead of me as I do behind me, so it's slightly more disappointing.

"It's a little raw right now, for sure, but it definitely hurts a little more than early in the career, just because you realize just how difficult it is to get to this spot. With all the changes this offseason and with all the installation of a new system and a new program, to get to this point, you felt like it was something special because it just didn't really make sense."

Although Rodgers threw for 326 yards and completed 31 of 39 passes with two touchdowns, he threw two interceptions and lost a fumble. Two of the turnovers came in the first half.

Rodgers and receiver Davante Adams also credited first-year coach Matt LaFleur for allowing the Packers to be "a player-led team."

"Gives a lot of hope," Adams said of LaFleur. "Every game is tough to win in this league, especially when you're a brand-new coach coming in with a whole new scheme. Everything's new, all new coaches [except] maybe two or three, and you just start from scratch. To be in this position that we are competing, for a championship, it was awesome, and I give a lot of credit to him."

More in this category: « Source: Jets ship Lee to Chiefs after GM shake-up Sources: Kubiak to take over OC duties for Vikes »
back to top