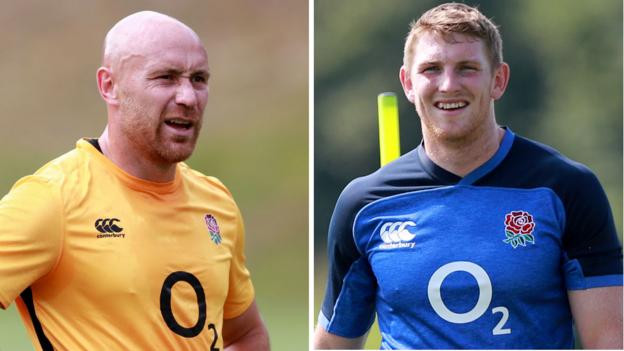 Gloucester scrum-half Willi Heinz and Bath wing Ruaridh McConnochie will make their England debuts against Wales at Twickenham on Sunday as they make a late bid for Rugby World Cup selection.

Heinz will be vice-captain and partners skipper George Ford at half-back, with Piers Francis at inside centre.

Sam Underhill and Tom Curry play as flankers together for the first time.

Head coach Eddie Jones said his focus for the four warm-ups is on "developing a team capable of winning in Japan".

Both Heinz and McConnochie were surprise inclusions in the wider training squad, with Heinz now edging ahead of Ben Spencer in the battle to be Ben Youngs' back-up.

The New Zealand-born playmaker now looks almost certain of a place in the final 31-man World Cup squad, which is named on Monday.

"It's been a whirlwind few months," said Heinz.

"It's been incredible. I'm still pinching myself that I am here, and I just feel so grateful to be surrounded by quality players in this squad that have helped me prepare this week, and I'm really looking forward to Sunday."

Meanwhile, former England sevens star McConnochie only switched to the XV-a-side version last summer, but has done enough to play his way into contention, especially with concerns lingering over Jack Nowell's fitness.

McConnochie lines up in a back three with full-back Elliot Daly and club-mate Anthony Watson, who makes a first England appearance since March 2018 after overcoming a serious Achilles injury.

Elsewhere, young Northampton flanker Lewis Ludlam is set to make his debut off the bench, as are Harlequins centre Joe Marchant and Saracens hooker Jack Singleton.

"Our focus has now changed to match preparation and fitness, and creating a game that will stand up to the rigours of the tournament where we have to win seven games in sevens weeks."

More in this category: « Quins miss out on play-offs after Lang's late penalty falls short Does England's Six Nations review add up? »
back to top

Leeds United manager Jesse Marsch has said his experience in the United States will help prepare the...

Raheem Sterling has said his unwillingness to accept a lack of game time at Manchester City led to h...

Former Real Madrid left-back Fabio Coentrao has been handed a one-match ban and an €850 fine -- a ye...

Celts given top win total with Suns on their heels

The Boston Celtics, the consensus betting favorite to win the 2022-23 NBA title, have the highest pr...

Joey Votto: Field of Dreams game 'an exceptional moment in my life'

A year after going all-in on their rebuild, where are the Cubs now?